Other side of the Fiji media harassment coin

CROZ WALSH, in his revealing Fiji blog, has embarrassed local media with his probing behind the headlines questions and revelations in recent weeks. For too long some Pacific news groups have been able to routinely hoist the “media freedom” flag over some issues that actually involve questions of professionalism and good practice. In the absence of public scrutiny by robust media accountability and issue programmes – such as Media Watch and Media Report in Australia and Mediawatch and Media7 in New Zealand – it is left to people like Croz Walsh and a handful of civil society critics in Fiji to prick the appropriate balloons.

One posting by Walsh this week exposed the media games playing over the controversial UN/Commonwealth letters leaked to The Fiji Times and Fiji Television, apparently before it reached the regime PM Commodore Voreqe Bainimarama. Other postings put the spotlight on how local reporting of US Ambassador Steven McGann’s speech on American-Muslim relations was so distorted against the regime that it amounted to “propaganda”.

Media reports said the police search warrant at Fiji TV was for a letter from Dr Sitiveni Halapua, director of the Pacific Islands Development Programme, and Dr Robin Nair, director of the Centre for International and Regional Affairs at the University of Fiji, asking Bainimarama for a meeting. Another search warrant was served on the Fiji Times for a copy of the letter written by the United Nations and the Commonwealth. The unsigned letter was a joint statement from the UN and the Commonwealth on their agreement to support the president's political dialogue forum.

Walsh rapped the International Federation of Journalists for its prompt media release, claiming that “crying wolf” too often over regime intimidation undermined IFJ credibility for “when it really matters”. Interestingly, he didn’t mention the PINA-linked Pacific Freedom Forum, which also circulated a media release condemning the search warrant process and intimidation. It quoted American Samoa-based co-chair Monica Miller as claiming:

The latest round of incidents provide a disturbing picture of the level of fear-mongering being blatantly practised by Fiji’s law enforcers against media professionals.

However, Walsh raised the spectre of mail tampering and the fact that police must respond to allegations of theft. In 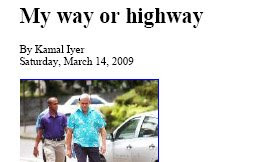 the end, National Federation Party general secretary Pramod Rae came clean and publicly admitted he had had a hand in provoking the “media intimidation” by leaking the letter to the media before PM Bainimarama had received it. NFP columnist Kamal Iyer largely ignored all this in his regular Fiji Times column condemning the "sword of Damocles":

To the ordinary unsuspecting citizen, it would seem that the two media outlets had committed treason, given the clockwork precision with which police performed their duty, not forgetting the rapidity of their action.

But Walsh’s blog provided another side to the story (partially reproduced here):

Wednesday, March 11: The Fiji Times reported ("Police search two news media offices for letters") that police have searched Fiji TV and Fiji Times offices for letters addressed to the interim PM. Police wanted to obtain copies of the letters and know how they had been obtained. Earlier the PM said he had not yet received one of the letters. If this were true, someone was tampering with the mail, and passing it on to others to whom it is not addressed, who then made the letters' contents public. Police must respond to accusations of theft or the publication of letters to which an individual or the media has no legal right.

The very same day, Wednesday, relying entirely on what they had been told from Fiji, the International Federation of Journalists condemned police (and by inference government) action as "harassment of Fiji media"...

Deeper things may be afoot than the IFJ knows. The whole situation may have been staged. For the IFJ to "cry wolf" every time an office is searched could mean they will not be listened to when it really matters.

Walsh also cited the Fiji Times editorial about "Intimidation tactics" that warned about a "new level of intimidation" and protests by the Coalition on Human Rights and the Fiji Women's Rights Movement ... and then:

Friday, March 13 ... and the truth is revealed: "Yes, we released letter, says NFP" in the Fiji Times. National Federation Party general secretary Pramod Rae announced he was the person who gave the media the UN/Commonwealth letter which led, as he must have known it would, to the police questioning, the condemnation of police action - and the interim government - by the International Federation of Journalists, further condemnation of assaults on media freedom by the NGO Coalition on Human Rights, and others ...

[Rae's] point that the letter was not a personal letter addressed exclusively to the PM may well be true (and the action of the police, acting properly on a complaint, may therefore have been unwarranted and excessive). But - and my wording is generous - his actions (in the use of the media and today's late revelation) were transparently "mischievous".

Regime spokesman and Deputy Information Minister Major Neumi Leweni claimed Rae's actions were "irresponsible" and "unprofessional" and undermining attempts to "move the country forward". Ironically, the long-awaited Fiji Media Council independent review (not yet public), while complimenting the council on its media freedom activities, has called on the body to step up its work around media responsibility.