WHILE the criminal libel cloud hangs over José Belo and his Tempo Semanal newspaper/blog over prison tender allegations published against Justice Minister Lucia Lobato, the lack of transparency over another government "tender"has come under fire. This time the fuss is over a controversial power scheme to generate electricity for the capital of Dili - it has come under scrutiny from Kla'ark Weekly ("Spark"). Now the issue also has the attention of Café Pacific. (Translated from Tetum, March 16 - Edition 42, 24 February 2009):

In a previous article (entitled “who is dumb?”), which Kla’ak published in response to the President’s accusation against Kla’ak journalists because of their environmental concerns and published work showing a lack of transparency in the tender process to acquire the heavy oil power plants. This information was based on the previous article published by Asia Times.

This edition will try to investigate the origins of Xanana’s dream.

When we think back in relation to the intentions of the AMP government to acquire secondhand generators, it all started on 18 February 2008. On that day a media release issued by the Foreign Affairs Office of the Chinese province of Guandong refers to Pedro Lay’s (current Minister for Infrastructure) visit to Gunadong Province:

Lay also added he would like to work together in cooperation with businesses in Guandong. When we closely examine this media release we notice that Pedro Lay was accompanied by business men from several companies such as Shenzhen High-Tech Industrial Park, Yantian Port, ZTE 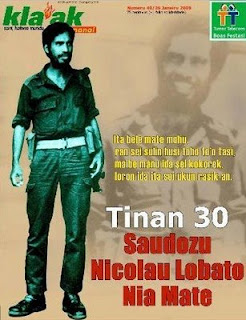 Several months after that visit the public did not receive any information from the government about the plan to construct the heavy oil power plants. The first time anything was mentioned was on 19 September when the Ministry of Finance requested expressions of interest for legal services to draft the contract between the Government and the winning bidder. On 24 October the government signed a contract with China Nuclear Industry 22nd Construction (as stated in the media release issued by the government entitled “East Timor to electrify the nation”)

Civil society and the National Parliament were shocked and critical of the government’s choice to power Timor-Leste’s development. However, the government continued to proceed with its plans and received parliamentary approval to go ahead with construction of the heavy oil power plants.

As recently written in the Asia Times and also by Lao Hamutuk, the tender process was not transparent. That appears to certainly be the case. When there is a lack of transparency, corruption can flourish. When corruption flourishes only a handful of people benefit. In this case, who was scheming behind the scenes? Timor-Leste has lost. The people have lost. But who has gained?

Information obtained by Kla’ak shows that the generators to be used are Sulzer and PC. When we did internet research using boolean expressions we found that the only people which sell both brands of generators are located in none other than Guandong (see list of links below), the very place visited by Lay. Many of the suppliers have links to Shenzhen TeWeiTe Mechanical & Electrical Equipments Co. Ltd., which is also located around Guandong With this information we would like to ask our readers: “In accordance with this article, who dreamed of this? And who filled their pockets?"