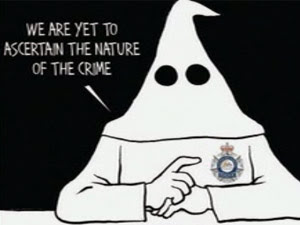 WHILE an Indian cartoonist has defended his controversial lampooning of the Australian police as Ku Klux Klan extremists amid a hostile reaction from Ocker media followers, a Klansman claims his movement has infiltrated a political party.

The cartoonist, Prasad, of Delhi's Mail Today, depicted an Aussie police badge pinned to a character with the notorious pointed white hood of the KKK following a controversy over race-based treatment of Indian students and a murder.

The speech bubble reads: "We are yet to ascertain the nature of the crime".

It was published as an indictment of homicide investigators in Victoria "being unable to say if the recent killing of 21-year-old Indian student Nitin Garg in a Melbourne park was racially motivated", reports News.com.au. A mixture of grief and anger marked Garg's funeral at the weekend.

The website quoted Prasad as saying: "I was responding to the news about the Australian authorities and police refusing to acknowledge the underlying racism in the attacks against Indian youth."

Meanwhile, the Sydney Morning Herald has revealed that the Ku Klux Klan says it has infiltrated an anti-immigration party preparing to contest seats at the next federal election. The paper reports:

David Palmer, the Imperial Wizard of the Ku Klux Klan in Australia, said several Klan members had secretly joined Australia First, a far right party that announced yesterday that it had the numbers to register as a political party.

"We aren't interested in actually registering as a party," Mr Palmer said. "Our main idea was we would move in and take back what we consider our Aryan parties.

"[The Klan] is a white pressure group; a white social group for white families. But also a reserve in case the ethnics get out of hand and they need sorting out."

When he made similar claims about the infiltration of One Nation, the party formerly led by Pauline Hanson, two of his associates were expelled from the party. The NSW director of Australia First, Jim Saleam, vehemently denies his party has been infiltrated by the Klan.

The Australian has condemned the caricature, saying in an editorial this is "no time for crude cartoons":

It is offensive and plain wrong, but the Indian cartoon depicting Victoria Police as akin to the Ku Klux Klan reveals the hysteria on the sub-continent over the safety of Indian nationals in Australia. Acting Prime Minister Julia Gillard was right to condemn the cartoon in New Delhi's Mail Today. There is no evidence police are acting in other than a professional manner in attempting to solve crimes involving Indians.

The frenzy in the Subcontinental press reveals deep — well, racism — on their part. No law-abiding person, including but not only the police, condones the murder of these young people in Australia. Nor the murders of the many other young people from various origins, including Australia for many generations. It is a sad statistic that when you have an influx of large numbers of any group, some of them may fall victim to the thugs and savages that exist in our society, as in all societies. To be sad is understandable and appropriate. To be hysterical and engage in racist remarks and cartoons in the name of branding Australia racist, is both stupid and counterproductive.