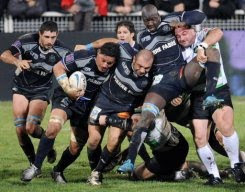 SHAME on the New Zealand media for the poor international rugby union coverage on Europe and the Pacific. It is astonishing that in the build up to the World Rugby Cup on these shores less than two years away that NZ media is so parochial about international rugby. Take the French Top 14 competition for example - probably the best and toughest rugby competition on the global calendar and where many New Zealand and Pacific players ply their trade. On three occasions (when now struggling Stade Français has been involved at the Stade de France in St Denis) crowds have topped 80,000 - easily shading the Super 14. Yet New Zealanders are forced to turn to European-based websites or even in Asia (such as the Bangkok Post in that traditional powerhouse of international rugby of Thailand - Stade were held to a 6-all draw by Montauban at the weekend, incidentally!) to satisfy their cravings. Thailand? (Even Fiji news media carry Top 14 results and other French rugby coverage.) Yesterday's New Zealand Herald's sport section, for example, had a page lead on Barcelona's "stutter" in the Spanish football league, yet not a word on international rugby. Interest in the potential teams that could put paid to NZ's World Cup chances yet again on its home turf is mounting and surely this deserves ongoing coverage. And bula Fiji for reinstating the much-loved cibi - the Flying Fijians' traditional answer to the All Blacks' haka.