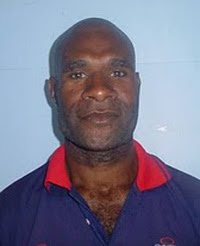 JACOB POK reports in The National three Correctional Services officers have been charged over the "great escape" of a dozen of Papua New Guinea's toughest criminals, including bank robber William Kapris (pictured). The three warders were taken to Boroko Police Station, charged under sections 138 and 140 of the PNG criminal Code over helping the January 12 escape from the Bomana maximum security prison and locked up for further questioning yesterday. But hopefully this is not another PNG cover-up where the small fry take the rap for doing the bidding of top political masters.

National Capital District metropolitan commander Superintendent Fred Yakasa said police believed the three officers had breached all security procedures of the CS. He added at a media conference: “We believe it is a planned thing, as there was a clear breach of security.

Police are offering a reward of K10,000 for the capture, or information that could lead to the capture of the 12 fugitives.

Meanwhile, Nau FM news director Titi Gabi gives an insight on Pacific Scoop into the continuing fallout for media over the jailbreak - her twin radio stations were threatened for scooping the story and running with it. The PNG Media Council warned other media to be ready for similar threats - such as one to blow up the PNG FM offices:

Our alerts and breaking stories were linked up on both stations, NAU FM and YUMI FM. Full reports ran at midday and the alerts continued. By mid-afternoon, one caller gave us a rather "friendly" warning about the possibility of attacks from the criminals and their mates. This was a female caller.

On Wednesday, a senior woman leader declined to comment and warned us of possible repercussions and to leave the story alone. By then, we had instructed reception to screen all news calls.

On Thursday, at about 7am- 8am, a male called threatened to blow up our office and attack staff and the company vehicle. I had a meeting with the news team and reminded them gently of the role of the media while also being vigilant.

“We will continue to report what must be reported,” I said.

How sad that they target us as as the media but that is expected in this job. Internal security measures swung into action and my young team was reminded to report “without fear or favour”.

Prime Minister Somare responsible for recent jailbreaks and the resulting terror in our communities http://wp.me/pLsTB-R

In his interview, he asked for forgiveness and asked that if the govt is willing then his is there to help curb the ring of criminal activities and gangs around the city. i think the govt should consider that and give him a try. bearing in mind that he isw still a criminal, he should be subjected to some conditions that will make him do his job welll.