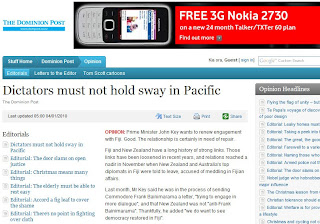 JUST four days after being included in Café Pacific's New Year honours list for his blogging on Fiji, Croz Walsh has launched an attack on "media abuse of power and influence" by anonymous leader writers, singling out a Dominion Post editorial as an example. He writes:

I've always thought there's something more than a little undemocratic and cowardly that those writing editorials do not reveal their identity, especially in a proudly democratic country like New Zealand.

All we know is that an editorial contains opinions (not always backed by facts or fully researched thoughts) that are usually written by the publisher, the editor or one of the editorial team. I see no good reason why these people, and journalists in general, who so often demand access to private information, hide behind anonymity. Why are so many media sources "usually reliable" or "our correspondent in X." Why does the law permit them to publish anonymous "leaked reports," even of personal emails? Why do we allow them these powers when we, their readers, do not even know who they are?

I'm also unsure why they think we should be interested in their anonymous opinions when we know nothing about their knowledge of the topics they discuss? We would not accept this from a doctor, a lawyer or accountant, so why should it be acceptable from journalists who play with our minds, mould our opinions, and set the boundaries of our democracy?

If the so-called Fourth Estate is entitled to a special, protected, place in our society, searching out hidden truths and using its "freedoms" to keep citizens and voters properly informed, then the media must be far more open, accountable and known.

The latest Dominion Post editorial, "Dictators must not hold sway in the Pacific", is a case in point. We know nothing of the writer who presumes to advise Prime Minister John Key what to do about our relationship with Fiji other than that he, she or it thinks it wrong for us to ease up on Bainimarama who "took power at the point of a gun and deposed a democratically elected government" and who since then has "tightened his grip on the country." Et cetera. Et hackneyed cetera. Nothing was written on anything even remotely wrong with the old "democracy" and nothing about anything good on the de facto government.

"Whatever else he does [the editorial states]... Mr Key should not accept advice such as that from Auckland academic Dr Hugh Laracy or, presumably, anyone else who thinks the travel ban and other measures have failed." Yet these measures, imposed three years ago, have brought about no change in Bainimarama's position; they are hurting many innocent Fiji citizens, and they've prevented many qualified people applying for civil service positions, even in positions not remotely political. The editorial thinks Mr Key is "right to try to make a new start with the commodore [but] that does not mean forgetting that he is a dictator. The aim must be that dictatorships do not become the 'Pacific way.'"

With this sort of inane, patronising advice, Key could well fall back on Laracy: after all, he is not anonymous; he has studied the Pacific for close to 40 years and, although not enamoured with coups, he does have a plausible alternative to our initially well intended but now obviously failed policy. I'm sure Professor Laracy will join me in issuing a public challenge to the Dom Post editor(s).

* Come out from behind your masks.

* State your qualifications and Pacific experience.

* Publish balanced statements on Fiji's past and present.

* Provide your readers with sufficient background for them to form their own independent judgments.

* Comment on at least some of the positive actions taken by the Bainimarama government.

* Take the trouble to find out what is really happening in Fiji.

And if you can't -- or won't -- do any of these, at least make an intelligent and realistic suggestion to help John Key formulate a workable policy towards Fiji.

Hugh and I may lose the debate, of course, but we would at least know who you are -- and your readers and John Key may learn something they did not know before.

No need to shed tears for either NZ Herald or the Dominion Post, because they both are suffering from the Ostrich Syndrome. Looking ergonomically, when an ostrich has its head in the sand, what is exposed? Of course its posterior or what we call ar** in our common everyday language. That is what you can call the Dominion Post and their blinkered armchair critics who have become a shame to the revered position of the Fourth Estate.

The unfortunate part is that John Key is still clinging on to Helen Clark's petticoat. Like Labour Government, the Foreign Policy of National government on Fiji is not determined or decided at the Beehive but in the Editorial Chambers of the Dominion Post and the New Zealand Herald.