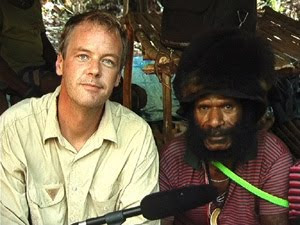 THE LACK of any firm evidence of the involvement of "General" Kelly Kwalik in a series of recent terrorist actions in Timika, West Papua, has led the Network of Human Rights Defenders in Papua to call on the President of Indonesia to take action against members of the security forces.

In a press release issued by Poengky Indarti of Imparsial, Andreas Harsono of Yayasan Pantau, Muridan Widjojo of LIPI, Amiruddin Ar Rahab of Activists Concerned about Papua, Markus Haluk of AMPTPI, Miryam Nainggolan of PPRP and Suryadi Radjab of PBHI, they called on the President of Indonesia to instruct the Chief of Police of Indonesia, the Commander of the Armed Forces, the Attorney General and the Minister for Law and Human Rights to take firm action against all those members of the security forces who pereptrate acts of violence in Papua.

The network also called on the Chairman of the Constitutional Court to take firm action against those who continue to try and sentence Papuans for giving expression to their basic rights. The government should also repeal Government Regulation No 77, 2007 [banning the use of symbols] which is in violation of Law 21, 2001 on Special Autonomy for Papua.

They also questioned allegations of the involvement of Kelly Kwalik which had resulted in his murder on the grounds that he had offered resistance to the police when they raided the place where he was staying, because this was in violation of the law and human rights which the police are required to uphold.

The network also said that the case has been further complicated by police allegations that Kelly Kwalik was responsible for a series of incidents in the vicinity of PT Freeport between July and October 2009, although such allegations had been rejected by Police Commissioner FX Bagus Ekodanto. who was the chief of police at the time.

The district police chief said at the time that the OPM was not responsible for the acts of violence in the vicinity of Freeport, and that there was no clear evidence implicating Kelly Kwalik.

The members of the network were deeply concerned that all this has led to fears among Papuans that acts of state violence could victimise anyone in Papua, who could be branded with the stigma of separatism and the OPM.

These allegations also represented a violation of the Papuan people's right to freedom of expression: they included the dispersal of people taking part in peaceful actions, the banning of books, the arrest, detention and incrimination of Papuans, including the murder of Papuans in the name of the OPM stigma. Such things must stop, they said. These actions not only violate the rule of law and human rights but also perpetuate the culture of violence and enhanced the authoritarian nature of the security forces, which was comparable to what happened during the
New Order of Suharto.

Such developments were taking Papua further and further away from an atmosphere of peace and the desire of Papuan people to make Papua a Land of Peace.