A Fiji students’ internet coup – a decade on 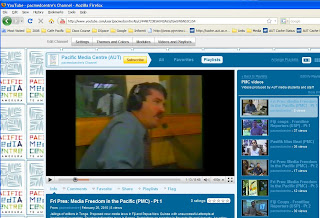 IN A couple of months, it will be a decade since the University of the South Pacific student journalism students staged their own internet coup with award-winning coverage of the George Speight “attempted” coup in Fiji on 19 May 2000. While renegade businessman Speight and his journalist offsider, Jo Nata, were eventually scapegoated into prison for treason, the politically acceptable face of the Speight coup, Laisenia Qarase, consolidated his power from caretaker leader to elected prime minister – twice. But, as we know, Qarase was no paragon of democracy and was subsequently ousted by a coup by the military’s Commodore Voreqe Baimimarama in December 2006. Many of the group of students who covered the Speight coup for Pacific Journalism Online and Wansolwara and won a string of awards from the Journalism Education Association in Mooloolaba, Queensland, that year have gone on to bigger and better things. Wansolwara editor Reggie Dutt, for example, is now at Bond University doing a masters degree. But the heady moments of that coup coverage will never be forgotten. The students' story was told in a short video, Frontline Reporters, which has now been posted on the Pacific Media Centre’s YouTube channel for posterity. The university unilaterally closed the student journalists' website and tried to gag the newspaper (actions later condemned by the faculty board of the School of Humanities) but the students continued filing their stories to the University of Technology, Sydney, which set up a special coup website.

An earlier video (1999), Pasifik Niusbeat, tells the story of the early stages of online newsreporting and Radio Pacific at USP. You’ll recognise many young media faces familiar around the region today. Another video, Fri Pres, covers the fight for media freedom across the region in 1996. Produced and presented by David Robie, and reported by Stevenson Liu and Priscilla Raepom, it was broadcast by EMTV in Papua New Guinea and Fiji Television. The astonishing thing about this University of Papua New Guinea programme is that while it was made 16 years ago, it could just as easily have been talking about post-coup Fiji censorship and the rest of the Pacific today.

Pictured, a clip from Fri Pres with then PNG Forestry Minister Tim Nelville talking about a death threat on talkback radio.

Congratulations to the USP Journalism Program. Thanks to you too David, this was a result of your vision and deication during your time in Fiji.