Samoan 'gangs, drugs and guns' too gung-ho for the BSA 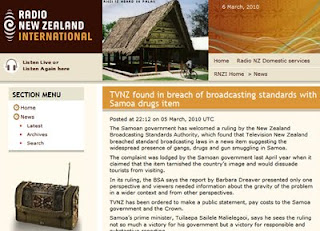 SO THE Samoan government has jumped the gun on the Television New Zealand “gangsta paradise” affair. In its eagerness to win a political point or two over the state-owned broadcaster (which incidentally has just supplied a "Pacific TV" gift of broadcast equipment to Samoa) in its long-standing controversial complaint about TVNZ accuracy, fairness and ethics, the government has itself breached the broadcast industry's watchdog embargo. This is a violation of an important part of the adjudication process, which enables both parties to prepare their response to the orders and to consider an appeal. In fact, Café Pacific wonders what part of the "NOT FOR PUBLICATION" label stamped on each page of the draft ruling, the Samoan government officials did not understand. If it was a court, this would be contempt.

According to TVNZ’s corporate affairs manager Megan Richards, an appeal could well be on the cards. She told Pacific Media Watch that TVNZ had complained to the Broadcasting Standards Authority about the embargo breach. TVNZ had expected the adjudication to be released on March 29. Richards said TVNZ was "considering an appeal in this case, which has a number of very unusual aspects. TVNZ stands by the substance of the story and the integrity and professionalism of the journalist concerned" – respected Pacific correspondent Barb

The BSA ruled against TVNZ on accuracy and balance grounds in its 25-page adjudication against the news item broadcast on ONE News on April 6 last year and also run on Tagata Pasifika . It has reportedly ordered TVNZ to make a public apology, awarded costs of $5000 to be paid to the Samoan government and $2000 to the Crown. But two other complaints over fairness and the impact on law and order were not upheld by the BSA.

Unsurprisingly, TVNZ is spitting tacks over the adjudication. This ruling signals a growing trend for Pacific governments to use the BSA as a means of waving a big stick against stroppy and independent journalists. Fairfax’s Michael Field faced a similar caning from the BSA following a complaint by the Fiji regime's solicitor-general in September 2008.

Radio New Zealand International picked up the Samoan press release but ran five paragraphs of the government’s spin with no follow-up comment or balancing interviews. It did not get comment from TVNZ or mention that the government had broken the embargo:

The Samoan government has welcomed a ruling by the New Zealand Broadcasting Standards Authority, which found that Television New Zealand breached standard broadcasting laws in a news item suggesting the widespread presence of gangs, drugs and gun smuggling in Samoa.

The complaint was lodged by the Samoan government last April year when it claimed that the item tarnished the country’s image and would dissuade tourists from visiting.

In its ruling, the BSA says the report by Barbara Dreaver presented only one perspective and viewers needed information about the gravity of the problem in a wider context and from other perspectives.

TVNZ has been ordered to make a public statement, pay costs to the Samoa government and the Crown.

Samoa’s prime minister, Tuilaepa Sailele Malielegaoi, says he sees the ruling not so much a victory for his government but a victory for responsible and substantive reporting.

There have been far too many incidences of unbalanced reporting with 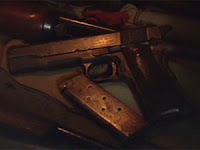 reporters and editors alike bent on producing and publishing half-cooked, sensationalised stories with the sole aim of stirring up controversy.

The ruling by the BSA is an onus for broadcasters and publishers to produce fair, balanced, in-depth and accurate news items.

There are also some very important lessons there for our local editors and budding journalists in how they do their jobs.

The ruling wasn’t to be found on either BSA online or the Samoan government press releases website.

No doubt there will be plenty of clucking in Samoan media circles, but it doesn’t stem the concerns that many of the region's journalists have about the dreadful threats or vindictive witch hunt faced by Dreaver or the hysterically partisan reporting of the issue in some sections of the Samoan press. It would be unfortunate if the BSA has not balanced its ruling with some stern criticism of the culprits in the Samoan media.

Of course, none of these stories below would have much to do with Samoan “gangs, drugs and guns”, would they?

Pictured: RNZI's report of the "ruling"; TVNZ's Barbara Dreaver; and a still from her "gangs, drugs and guns" story. Other background:

Hi David, interestingly what you see as "Pacific governments to use the BSA as a means of waving a big stick against stroppy and independent journalists" -- as a Pacific Islander, I saw it as big corporate Western media sensationalising a crime story (as per usual) and not thinking about the effects it will have on the already stereotyped, disadvantaged, Samoan population in New Zealand.

Kiwis likely watched the embellished scene with the Makoi boys and think "typical gangster Samoans"... when in fact those Makoi boys are probably regular, funny, kick-back guys you see around your village - I know many of them in Tonga. Samoan gangs in NZ have an entirely different dynamic to the communities back home, but this story - how it was edited, pieced together - in my view, took advantage of the NZ stereotype.

I certainly don't agree with many of the Samoan govt's statements (some I thought were over the top - for eg. saying that the story threatened tourism industry), and totally disagree with commentators personally attacking Barbara Dreaver - she is a brave, admirable journalist.

But I will say that the BSA ruling should bring attention to the "norm" we've come to call TV journalism. I believe there IS a Samoan drug trade, but it has a very different face to how it was portrayed in the TVNZ broadcast. The story just dipped its toe in the water (which is good, it needed the attention), but then went on to over-embellish the few facts it held, at the cost of an accurate representation of the Samoan community.

Good points Josie, but Café Pacific’s primary concerns here are about the apparent flaunting of due process by the Samoan government and the nasty scapegoating of a journalist who has contributed so much to regional journalism – and who actually opened the TVNZ door to a higher level of quality reporting on the Pacific. I have a copy of the ruling and ethically would not use it until the BSA has issued it. Each page of the 25-page adjudication is stamped in a large font “NOT FOR PUBLICATION” as the adjudication process about the orders was still under way as there may be an appeal by TVNZ. The fact that some Samoan government official(s) would be a party to this violation of the complaints process and then breach the embargo is disturbing.

It's not a matter Pacific Governments using bsa to wave a big stick. They could have done that on their own. It is more a matter of using the local authority in the country in which the broadcast was made to properly regulate the broadcaster and in this case the journalist and news organisation by the rules of the country in which they are situated. In this case it was quite evident by most parties in public and private that Ms Dreaver and One News was clearly in the wrong.

There's a certain schadenfreude in the ruling against Barbara Dreaver. Coming from the Pacific herself, you'd imagine she might have a modicum of appreciation for the nuances and sensitivities of island life. But these have been signally absent from much of her work Never mind her reporting on Samoa. Her stuff from Fiji has been woeful. No appreciation of the complexities there, just the same old hoary line about restoring democracy when the political system hasn't been truly democratic at all. Describing her as "respected" must surely be some kind of joke. At best, Dreaver is a mediocrity and TVNZ should be held to account for not finding someone better to report the neighbourhood properly.