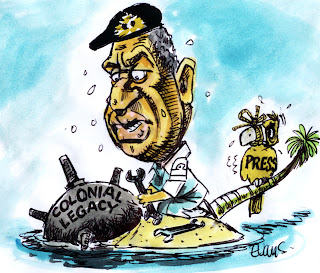 Example: To be frank, I do what I want, when I want and for how long I want.”

Driti: A person who abuses human rights and wants to go to the Middle East to forget about it.

Example: “I could be more frank with you at the Queen Elizabeth Barracks.”

Leweni: An army expression about freedom of speech in the media.

Example: That reporter deserves a Leweni around the ears.

CCF: Usually said under the breath and sometimes with a religious tone.

Labour: To labour on

Example: “I was far too frank with him, for my own good.”

Jalal: Another word for $20; a restaurant licence.

Example: “There is no such thing as a free meal in politics."

Rika: An editor who gets headaches every time he reads the newspaper.

Example: “I should have stayed in television.”

Constitution: A vessel to break

Judge: An educated person who can’t.

Example: “I make bad judgments but not about my power and my money.”

2014: A mythical year; a golden future; peace and goodwill to all men except previous politicians.

Poverty: To be poor either in understanding or wealth.