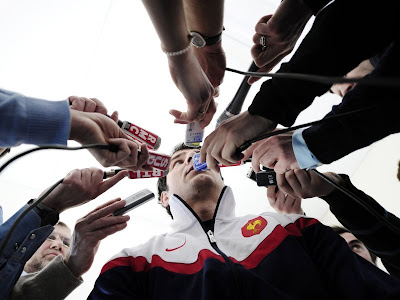 A RARE Café Pacific switch from media and politics to rugby: France deserve the Grand Slam accolades for Marc Lièvremont and his coaching crew’s patience in rebuilding the national team with vision and confidence after their humiliation at the hands of les Rosbifs at the 2007 World Cup.

The French team has shrugged off its ‘Marcatraz’ stigma – a reference to the Marcoussis training centre outside Paris and San Francisco’s notorious ex-prison Alcatraz. This was how the centre was dubbed in the conservative coaching era of Bernard Laporte.

While France's 12-10 defeat of England in the Parisian rain at the weekend was a pale imitation of the scintillating victories over Scotland, Ireland, Wales and Italy in previous matches, the Grand Slam was a deserved honour for les Bleus. Bravo!

Sounding a 2011 World Cup warning to both hosts New Zealand and fellow group contender Tonga, Reuters rugby writer Jean-Paul Coret says about Lièvremont’s resolve against the insults during 2008 when the coach chopped-and-changed to blood a range of young players for the future:

The 41-year-old's tendency to tinker was castigated but Lièvremont remained firm. By the end of the season he selected 58 names.

The eventual result is a strong and competitive squad with an awesome front five and a backbone of 10 players in key positions -- front row, backrow, halfbacks, inside centre and fullback.

Stuart Barnes in the Sunday Times described how Lièvremont had gone from “villain to hero” in France, adding:

An entire nation savoured France’s first Grand Slam since 2004. It was all the more ecstatic for the choice of England as the fifth and final victims. Perfidious Albion — more than any other rugby nation — has haunted French rugby throughout the past decade. Supporters remember how a limited but bloody-minded England stole their dreams with fierce determination and Jonny Wilkinson’s boot in the semi-final of their World Cup three years ago. This was French rugby’s Agincourt moment…

French rugby understands its own market. It has reverted to tradition and is rediscovering the best route to present and future glories.

Four of Lièvremont's players – Morgan Parra, Imanol Harinordoquy, Mathieu Bastareaud and Thierry Dusautoir – have been nominated for the Six Nations' player of the year award alongside Shane Williams of Wales and Ireland's Tommy Bowe. As French captain, Dusautoir may well get the nod in recognition of a standout performance from the whole team.