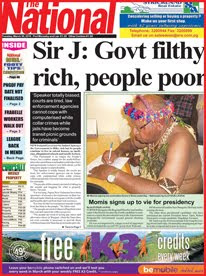 NEW Ireland Governor Sir Julius Chan accuses the Papua New Guinea government of being "filthy rich" while many of the country's people still "live in saksak houses [with] no medicine, dilapidated schools and [are] totally forlorn".

“The Parliament is no longer the People’s House, but a rubber stamp for the multi-billionaires who can influence our leaders to introduce laws and agreements we know very little about, yet the long term impact is unpredictable," he is quoted as saying in today's front page splash story in The National.

Chan, a former prime minister who resigned in the wake of the Sandline mercenary crisis in 1997 after defeating a motion for him to step down, was reported as saying at a gathering of women in Faniufa village outside Goroka:

“The Speaker is totally biased, the courts are tired, law enforcement agencies can no longer cope with computerised white collar crimes, whilst our jails have become transit picnic grounds for criminals.

“The people of this country are tired of sitting on the outside and begging for what is properly theirs,” he said.

“For too long, Papua New Guineans have been spectators of resource developments on their traditional lands which do not equate with the wealth and benefits derived from their rich resources.

“It is time for the Government to transfer wealth from the State to the people,” Sir Julius said. “The people are tired of others telling them what they can and cannot do with papagraun.

“The people are tired of seeing pay raises and allowance raises in Waigani, when the State does not even consider it necessary to provide them with the pittance the State has promised to provide.

“Under the current and previous governments, New Ireland has not improved after 15 years of Lihir gold and three years of Simberi mining, and this would be the same scenario in all mining provinces across the country,” he said.

Sir Julius said mothers in Bougainville, after the 16 years of the crises, had shown determination and resilience to sustain a society built out of nothing, making the best use of them to rehabilitate and rebuild families and communities.

“This is the reason we need strong representation of the women in all spheres of endeavour, a step that we, in New Ireland, have accepted and submitted to the autonomy committee to have nine seats of deputy presidents of LLG to be contested only by women and give them free choice to contest all other seats in the provincial elections.

“We need to re-look and reassess our policies and strategies and exercise fairness and justice that will position our people to access more benefits from what they already inherit and own as citizens of our country,” he added.

Sir Julius said women must start exerting their influence as equal stakeholders of the wealth of the land to attain balanced social-economic development for the country.

“In the wake of the mineral, oil and gas boom, they must seize the opportunities to benefit as equal stakeholders of the land,” he said at a gathering of women in Faniufa village outside Goroka yesterday.

He said the role of women needed to be redefined and strengthened to uphold their status.

“They have been taken for granted as participants in the various levels of landowner agreements and investment undertakings with developers and the State irrespective of their special status and role in the communities.

“You have to move on from housemaids to housekeeping and stop the men from squandering and signing agreements that cannot be fulfilled,” he added.