PACIFIC journalists are angry over the cowardly weekend assault on Vanuatu publisher Marc Neil-Jones - allegedly by prison officers incensed over an embarrassing news story. They are also disturbed over the implications for the safety of the region's media practitioners when faced with such an brutal attack by employees of a state agency. According to Radio NZ International, Marc suffered a broken nose, a black eye and kicks to the body in the attack on Saturday at his Vanuatu Daily Post's newspaper office in Port Vila. He was alone in his office at the time. The newspaper ran a picture of his injuries today. The radio said he had filed an official complaint, accusing police officers from the capital's Correctional Service Centre of the malicious attack on him. He was reported as saying that the officers objected to his newspaper's coverage of the burning down of the French jail correctional centre. The Daily Post on Friday ran a picture of the jail gates being left wide open with

A truck pulled up with angry officers allegedly under the influence of alcohol working with Correctional Services at the prison. They stormed into the office and accused Neil- Jones of causing the dismissal of Joshua Bong as Acting Director of 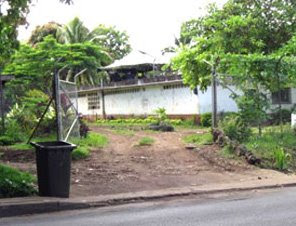 Correctional Services and demanding to know who was going to look after the prisoners now. A shaken Neil-Jones advised police:
“One of them was well built, strong and with a belly wearing shorts and a singlet punched me in the eye and nose and hit me four or five times.
“I was kicked a number of times when I was on the ground. The two others with him threatened to kill me because I hadn’t got their side of the story on the problems with the prison. One threatened me with a knife and said he would cut my neck and another threatened to shoot me with a gun. They said they were going to take me to the prison to look after the prisoners. It was not a pleasant experience."

Marc Neil-Jones, 51, is a Vanuatu citizen and an insulin dependent diabetic. He has been a strong campaigner for media freedom and has been assaulted on previous occasions. The Daily Post said he had suffered from high blood pressure since being illegally thrown in the prison by police after he had demanded the suspension of a police officer for assaulting his sports journalist in a rugby game between police and USP a few years ago.
After being freed, Marc wrote about human rights violations against prisoners. In 2000, he was deported by then Prime Minister Barak Sope for publishing "state secrets"- including "the news that eventually got Sope convicted in court".
Commander South Superintendent John Taleo says police are "investigating". Pictures: Vanuatu Daily Post

Pacific Media Watch condemned the "cowardly" assault, Media Asosiesen Blong Vanuatu (MAV) deplored it while also criticising "biased reporting" and the Pacific Freedom Forum denounced the "outrage". But not all media groups in Vanuatu are so supportive. A response to PMW blamed the "trial by media" style of Daily Post reporting as a source of some problems in Vanuatu. DP editor Kiery Manassah penned this "caught in the crossroads" commentary about the affair. Marc later called for a review of Australian and NZ aid to Vanuatu - especially NZ which is funding a revamp of Vanautu Correctional Services and "should be worried about how its money is spent" if officers are abusing their power.