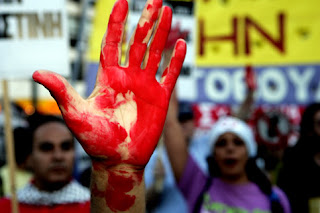 RANDOM letters to New Zealand media protesting against the global hypocrisy over Israel's shameful and murderous assault on the citizens of Gaza. Also check out the YouTube video on an earlier Auckland protest against Israel's genocide against the Palestinians earlier this month featuring Green MP Keith Locke and may other speakers.

Condemn Israeli attacks
There can be no excuse for the totally disproportionate Israeli attacks, which should be condemned by every Western Government without hesitation. The Nazis tended to take 10 French lives for every German killed. This ratio in Gaza is 280 to one. That is the true measure of the appalling nature of what is happening and the tacit support by the US is shameful.
Peter Berman
Dairy Flat

Israeli airstrikes
Hundreds of Palestinians have been killed and hundreds wounded by Israeli airstrikes. Israeli spokesman Avi Benayahu says this is just the beginning. While he claims the targets are the (official) police force of the (democratically elected) Hamas Government, the reality is that the victims have been a cross-section of the population already weakened by the illegal siege, which has starved them of food and medical supplies.
The international community must demand that Israel stops the bombing ends the siege, removes Israelis from the illegal settlements and abides by UN resolutions.
Bob van Ruyssevelt
Te Atatu South

Rule of law
Israel's merciless military assault on Gaza is a war against the rule of international law, human rights and the Geneva Conventions. The violence continues to be framed as a conflict between warring peoples with equal power. But Israel is a version of an apartheid state, based on racist ideology and a colonial occupying force with one of the most advanced militaries in the world.
The multiple forms of collective punishment currently being inflicted on the Palestinians in Gaza reflect Israel's 60 plus year history of ethnic cleansing: blockades of fuel, food and medicine, and endless brutal attacks promoted as acts of self-defence.
For human rights of the Palestinians to be advanced, Israel must be isolated like apartheid South Africa was in the 1970s and 1980s.
J. Wakim
Epsom

NZ's response
I wonder why our Minister of Foreign Affairs, Murray McCully, has refrained from condemnation of the Israeli military action against the people of Gaza. It is true that the events are saddening, but this calls for public condemnation.
Israel's actions are hugely disproportionate to the dangers posed by the homemade rockets some Gazans launch. Mr McCully's assertion that it is pointless to debate proportionate versus disproportionate use of force is disconcerting and lacking context.
Some 1.5 million Gazans have been effectively starved since June 2007 by Israel blockade of the coastal city.
If I am denied food, water, medicine, fuel, sewage treatment for one and a half years, I would get pretty angry. Yet the rulers of Gaza have honoured a ceasefire for the past six months but saw no lifting of the blockade in return.
Khalil Bosauder
Howick

Gaza bombing
When Israel bombed Gaza's elected Hamas Government, university and mosques and killed more than 300 citizens, I sent emails to ten leaders in Israel and New Zealand. Only one of them was not delivered.
The letter addressed to Prime Minister Key was returned with the message:
Undeliverable: (Contains Potentially Offensive Language).
My polite letter contained no word that would embarrass any sensitive person. I was raising questions of policy about which a Prime Minister might welcome comments from citizens he was elected to serve.
I told him that I believe God made and loves all human beings. Hence the Israeli Government's atrocities are comparable to those committed by the Nazis.
By years of brutal occupation, starving and impoverishing 1.5 million people and psychologically damaging half a million children, Israel actually provokes the people of Gaza to retaliate.
Rocket attacks on Israel from Gaza cannot be justified - I said - but if our government does not act to stop this holocaust we will be guilty, like those who did not speak out to stop the massacre of Jews in an earlier one.
Peter Munane
Dominican friar
Auckland

Pictured: The bloody hand of Israel - from Electronic Intifada (Greek protest against an earlier Israeli assault in 2006).

For what it's worth, there are some more nice photos of that protest
HERE
.