Oz, NZ boost aid to flood ravaged Fiji - and then? 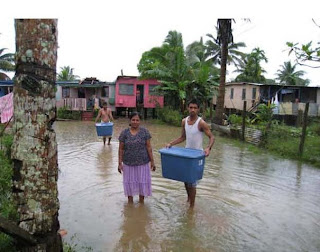 GOOD to see the political correctness over Fiji's military regime in Australia and New Zealand has given way to humanitarian principles - at least for the moment. Canberra has upped its aid to A$3 million and Wellington to NZ$600,000. Bula vinaka! According to ABC News, Foreign Minister Stephen Smith says $1 million will be spent on emergency food, water and sanitation, including $150,000 that has already gone to the Red Cross. The rest is an immediate contribution for recovery and reconstruction. ABC says Smith rejected suggestions Australia had not done enough soon enough, and said he stood ready to do more.
Auckland-based columnist Ranjit Singh, a frequent critic of New Zealand government policies and hypocrisy over post-coup Fiji, praised Wellington for "having a heart" and directing aid through the Fiji Red Cross. He added in his Fiji Times piece "Will disaster heal rift?":

Congratulations to the National Government for rising above petty-points-scoring and thinking of the suffering of poor people of Fiji, despite its difference with Bainimarama's regime. I hope this feeling will snowball to an extent where, in addition to increased disaster aid, the cooler and moderate heads will get together to engage Fiji in fruitful dialogues that will redeem New Zealand as a caring elder brother and not be branded and perceived as a heartless bigger and richer bully. 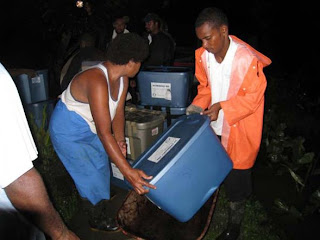 And a word of praise from Café Pacific for the efforts of Rotary. Felicity Anderson, in a media "labour of love", has dished out some "photographic evidence to show practical aid is getting through NOW". Pictured is the delivery of emergency boxes. Another $180,000 worth of aid was being despatched today in a deal with NZAID and Air Pacific.

For those keen on donating to help Fiji through Rotary in New Zealand, cheques can be made payable to Rotary NZWCS Ltd Project Account and posted to RNZWCS Ltd, PO Box 20309, Christchurch 8543, or e-banking donations can be made to Westpac Bank A/C 03 1702 0192208 01.