PUBLISHER and free media champion Kalafi Moala has an absorbing new book on socio-politics, culture and the media in Tonga heading for the public arena. And when it does, expect a few fireworks. Among the wide-ranging topics that he tackles with In Search of the Friendly Islands, are the flaws - as he sees them - of the current leadership of the pro-democracy movement. He also pulls no punches in his verdict on the "Black Thursday" riot in Nuku'alofa during November 2006, which left deaths, a trail of destruction and bitter political controversy in its wake. Moala won the PIMA Pacific Media Freedom Award in 2002 and 2003. This new book is a sequel to his The Kingdom Strikes Back (2002) about his struggle for media freedom.
Meanwhile, he has had a spot of bother with his Kiwi branch of the Taimi 'o T 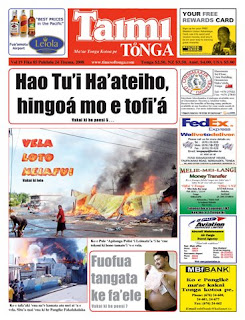 onga publishing operation. Last weekend's Sunday Star-Times reported the closure of its local publishing company, the Lali Media Group - liquidated because of an unpaid tax bill. Moala blames it on a management communications problem. As he is now based back in Nuku'alofa after his stint publishing in exile in Auckland, he had less of a close oversight of the Auckland operation than in the past. But the newspaper, now run by Tonga-based Taimi Media Network, is still going from strength to strength. Another registered company, Taimi Ltd, is now the New Zealand branch. Picture: TNews

Good show Kalafi! I hope his new book meets with every success and is an agent for positive change in Tonga. I knew him back in the 1970s when he filled an entirely different role in the area Christian youth work; not unusual for a good Tongan lad from a Methodist background. Kalafi was always full of energy and inspiration back then and it is good to see that these traits have not diminished over the years. I will look forward to reading the book and learning something more of Tonga and Tongan society.