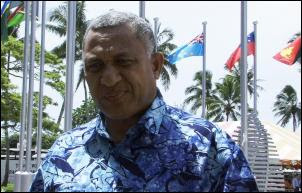 SO THE countdown begins – the moment of truth arrives. By midnight on May Day, the Fiji military regime of Commodore Voreqe Bainimarama faces suspension from the 16-nation Pacific Islands Forum. And given that the regime leader has thumbed his nose at the Forum May 1 deadline for an announcement of elections and a poll by the end of the year, it seems the inevitable will take place. And then the 53-nation Commonwealth, which will take its cue from the forum, undoubtedly will follow suit. The regime is optimistic that the forum won’t take this drastic step right now. Bainimarama wrote an 11th hour letter to the forum explaining the regime’s roadmap ahead leading to a 2014 vote.

But the optimism doesn't appear well founded. Bainimarama's strongest supporter in the forum, PNG prime minister Sir Michael Somare, has apparently deserted the regime and is siding with the Australian and New Zealand isolationist push. Australian Prime Minister Kevin Rudd gloated over the claimed United Nations decision not to award any more peacekeeping duties to the Fiji military. The hypocrisy of Australia and New Zealand is deafening. And this can only end badly, even disastrously for the region. The regime is likely to respond with anger. Will it be time to toss out the Australian high commissioner? The forum has never taken such drastic action against a member in almost four decades of virtual “Pacific way” consensus. If it does so this time – excluding the most influential and crossroads island nation of the region – the isolationist policy will come back to the bite the forum in most unpredictable ways.

It will also open the door to a dramatic rise in Chinese influence in the region, at the expense of Canberra and Wellington. It was interesting to see the turnout for the swearing in of Ratu Epeli Nailatikau as Vice-President – ironically the chief was ousted as military commander when Sitiveni Rabuka staged his double coup in May 1987 (against both Dr Timoci Bavadra's Labour government and against his own two higher ranked army officers). Present for Nailatikau were the high commissioners of India, Malaysia and Papua New Guinea and the ambassadors of China and Kiribati. As one of several Fiji correspondents to Café Pacific noted in response to Rudd’s combined statement with Somare about peacekeepers, the media and the forum, the Pacific’s failed policies will simply ratchet up the response and counter-response until what … a counter-coup and ruin for the region?:

It is this form of conduct towards Fiji that has elicited the response we now have. The seriousness and the severity of response will continue apace. So why not choose a smarter approach?

My own view is that the position taken towards Fiji is “lazy”. It is knee-jerk and quite “unsmart” - unless, of course, complete destruction of the Fiji Islands as a state is intended? It appears to be.

In the face of increasing aid from China, it is hard to imagine how or why such an un-nuanced position would be adopted at this juncture? That is precisely why I believe the Commonwealth connection is of paramount importance. All our historical ties are to the Commonwealth of Nations and they have the capacity to understand how to engage with Fiji.

Painting a military regime into a corner is jousting with fire. The fire is already lit. Why would one continue with such utter folly? However, there is obviously an ultimate end in sight. I shudder to think what it might be. No good will come of it. And those of us on the ground in Fiji who have an inkling of what is intended will never ever forgive such an approach.

I should like to remind all those at the Australian National University and in the Australian government that Fiji is not a rugby ball with which one may play as one sees fit. The ordinary people of Fiji deserve better than that. They have suffered for years from what I might call a gung-ho, flippant and off-hand approach from those in this region who ought to have a deeper, more decent, humanitarian concern.

Delivering us all into the furnace is scarcely that?

In a Correspondents' Notebook blog posting earlier this week about the forum deadline, Radio Australia's Bruce Hill leapt to the support of Australia and New Zealand:

For a pair of neo-colonial, ignorant, un-nuanced, non-indigenous bullies with a political system transplanted from the other side of the planet and imposed at musket-point, Australia and New Zealand are very popular places for Pacific islanders to live.

American Samoan congressman Faleomavaega Eni Hunkin has hit back at criticism of his meeting with Bainimarama. He has again condemned Australia - and also New Zealand's "shameful" policy over Fiji citizens, saying that Fiji needs dialogue now at this critical time. Café Pacific notes a couple of pieces worth checking out at the Pacific Media Centre - David Robie's round-up of Fiji censorship and David Brooks' focus on the blogosphere. Over at Global Voices, Michael Hartsell examines the crisis of the forced retirees - all those in the civil service over the age of 55. While the Public Service Commission has said more than 1600 public servants are affected by today's deadline (Bainimarama, who turned 55 earlier this week, is exempt), one blog has estimated that the true figure is closer to 2200.

I cannot fathom why it is that Bainimarama sympthasizer's do not seem to grasp the fact that hands of friendship and willingness to help have continuously been extended to Bainimarama by all PIF leaders for the 3 years he's been in power.

What ELSE can they do? Seriously. Have another special leaders meeting that he'll only thumb his nose at? Have more PIF Special Working Groups that they don't attend? Whaaat???The guy is a nutter, he does not negotiate and PIF Leaders are expected to let him kick him in the gut till kingdom come?

Right now Bainimarama is the most hated man in this country -- this was not the mood 2 years ago. And it's because the lights have switched on for many that it was all about him.

The hypocrisy of Australia and New Zealand will long be remembered.