Rabuka’s legacy and the seduction of Bainimarama 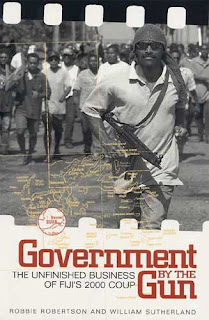 ROBBIE ROBERTSON, author of two books on Fiji’s coups and a former professor in governance at the University of the South Pacific, isn’t too impressed with Graham Davis. The Fiji-born journalist’s controversial article about “dealing with the dictator” has won a lot of traction in some quarters. At the very least, it balances much of the weight of media coverage in Australia and New Zealand, which has been so simplistic. But while New Zealand seems to be softening its stance towards the regime, at least to possibly open the door to some future dialogue, Robertson warns against being seduced by regime leader Voreqe Bainimarama merely “because of what he promises”. In a message to Café Pacific, he says: “I fear that even if he delivers, the result may not be what we wish for.” Robertson, who co-authored Shattered Coups about 1987 with his wife Akosita Tamanisau, and co-wrote Fiji: Government by the Gun in the wake of George Speight in 2000, has been so troubled that he penned a letter to The Australian. Here is his reply to Davis:

Fiji’s political kingmaker
GRAHAM Davis ("Dealing with the dictator", Features, 16/4) exhibits a very common fallacy about Commodore Frank Bainimarama's reconstituted coup. Bainimarama's goal of instituting a non-racial system of voting may be a very laudable objective in a country whose recent history has been riven by racial division. But the means chosen to implement that goal is entirely inappropriate.

Many people thought that Sitiveni Rabuka's 1987 coups (and that of George Speight in 2000) had similarly laudable objectives. They were designed to uphold the rights of indigenous Fijians who feared being swamped by Indo-Fijians. In fact, as Davis rightly points out, this was largely a myth perpetuated for more mercenary goals.

The consequence for Fiji was a political storm far worse than today's, but within 10 years it had retreated from ethno-centrism and introduced a new Constitution in 1997 that it could rightly be proud of. Speight in 2000 was a bloody reminder of the danger the Rabuka path would always hold for Fiji if institutions succumbed to its logic.

Fiji emerged from those political storms stronger than ever, with a hugely sophisticated and active civil society, a dynamic free media and a strong legal system. Yes, the old Fijian nationalist Laisenia Qarase was not as wise as he should have been when in office, but his rule was no dictatorship. He eventually agreed to a power-sharing arrangement with the opposition Labour Party as the Constitution required, and that decision was popular. If allowed to continue, it might have transformed Fiji's politics and helped to break down the racial divisions both leading parties still reflect.

In other words, change was already in the air, not least because the purported threat Indo-Fijians posed to Fijian dominance has dissipated. Indo-Fijians comprised nearly half the population in 1987; by 2006 only 37 per cent. It is estimated that their proportion may fall to under 25 per cent by 2020. Under these circumstances, electoral systems will have to change, and such change was already being publicly debated before Bainimarama chose to overthrow the recently elected parliament in which power was being shared for the first time among the representatives of 80 percent of the population.

The danger Bainimarama poses lies not in what he says he will do but what he does. Here is a man who claims he and the military forces he represents have the right to interfere in the political process whenever they, and they alone, choose. This is the Rabuka legacy, and if Bainimarama succeeds in recreating Fiji's democracy in five years' time, he will have confirmed for all time the role of the military as Fiji's political kingmaker.
Robbie Robertson

Meanwhile, seasoned Australian Pacific affairs journalist Sean Dorney has wowed students at Queensland University of Technology. According to Alan Knight's blog DatelineHK, Dorney says the Fiji media are being forced "to buckle under" and censorship is being branded as the “journalism of hope". In New Zealand, the Television New Zealand Maori affairs programme Marae has featured Bainimarama’s elder brother, Sefanaia. Others on the panel were former Fiji Broadcasting Corporation Ltd chief executive Sireli Kini and Nik Naidu, spokesperson for the Coalition for Democracy in Fiji.