'Sulu censors' at work in the Fiji gagging regime 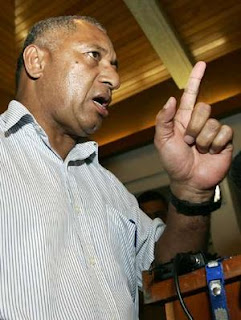 MAKING news in Suva is what’s not making news, reports Rebecca Wright for New Zealand’s TV3 Lateline show. The only story on Fiji Television to make it past government censors was about 24 people being held in policy custody for minor offences.

One of those in custody was one of the station’s own young journalists – Edwin Nand, detainedfor two nights for questioning about sending material to New Zealand media outlets. But he's now free. According to Wright:

3 News reporter Sia Aston and cameraman Matt Smith were not jailed, but they were harassed and then deported when their efforts to report on Fiji's latest political crisis upset the regime of Commodore Voreqe Bainimarama. “They want nothing but positive stories about the regime, the interim government. Anything outside that is just not allowed,” says Ms Aston.

Wright went on to quote Pacific Media Centre director David Robie: “It’s a classic situation that if you're going to have full out military control, you've got to have control of the hearts and minds of people and control information.” But only a couple of sentences or so were used out of quite an extended interview. Robie actually had quite a lot to say about the “sulu censors” and the latest censorship regime back in Fiji that vanished into limbo. Incidentally, the TV3 anchor for this story was ex-Fiji TV presenter Rebecca Singh.

Tonight, Russell Brown’s Media 7 team did another programme about the Fiji crisis with TVNZ Pacific affairs reporter Barbara Dreaver, former Fiji Daily Post publisher and columnist Thakur Ranjit Singh and David Robie. Watch out for it on Thursday night on the digital channel TVNZ7.
Meanwhile, Reporters Sans Frontières have come out with another tough statement against the regime, accusing it of dealing a “mortal blow” to press freedom and moving to a Burmese-style militarised system of prior restraint and censorship. In another development, journalism and media schools have now broken their silence over the Fiji crisis with a timely statement supporting expelled Australian Broadcasting Corporation journalist Sean Dorney and Fiji journalists who are being harassed and intimidated. See professor Alan Knight's DatelineHK blog for the full statement and 44 journalism and media educator signatories.