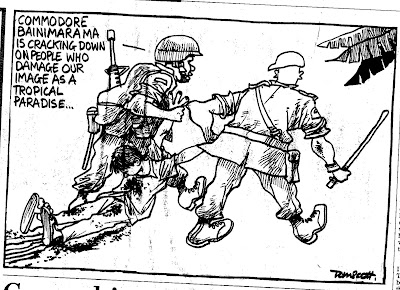 UNBELIEVABLE! NZ Prime Minister John Key's statement about the military is astonishingly inflammatory, given his own remarks a few days ago about how volatile the situation was in Fiji. He said NZ would consider sending armed forces to Fiji if they were "needed to stabilise the peace". Café Pacific considers he means the peace that NZ's foreign policy has contributed to destabilising in the first place. Contributor Pat Craddock writes:

Why on earth does John Key shoot his mouth off by saying that New Zealand would consider sending armed forces troops into Fiji if they were needed to stabilise peace as part of a multi-lateral action?

This uncalled for statement is unworthy of the man many citizens voted into power last year. He would have been better informed to keep quiet. Any moment now, he is possibly going to relapse into quotes from a former leader and say you are with us or against us.

Fiji has enough problems of its own. This inflammatory language by our Prime Minister can only feed into the unfortunate poisonous rhetoric of Commodore Voreqe Bainimarama about our country and its politicians.

Mr Key, you are my Prime Minister now. Fiji is our neighbour and New Zealand must try to keep dialogue open. How do you do it? I don't know. But I sure can recognise toxic and irresponsible language from our top leader?

NZ 'would consider sending troops to Fiji'
Posted by café pacific at 7:47 PM