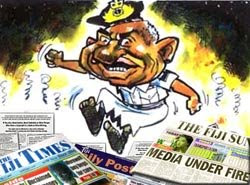 THE FIJI regime hasn’t stopped at booting out three Australian and New Zealand journalists. After a raid on the regional news service Pacnews, another journalist has been detained and others are on the “wanted” list. Ironically, this comes just when the regime’s Ministry of Information has put out a statement claiming that international reporters are “most welcome” to come to Fiji – providing they report “accurately and responsibly”.

Pita Ligaiula was escorted out of his Pacnews newsroom in Suva earlier today ago by two police officers and senior Ministry of Information officer Viliame Tikotani. The regime isn’t too impressed with the stories running under his byline for the American news agency Associated Press. Two other local journalists reportedly in the regime’s sights are Ricardo Morris (stringing for Radio Australia) and Matelita Ragogo (Radio New Zealand). He is now free after spending 12 hours in police custody.

Leweni claims Fiji is like many other countries where entry by journalists is controlled: "Fiji is no exception. Journalists who have been deported because they breached the visa conditions will not be allowed back into the country."

Reporters Sans Frontières and many other media organisations (including the Pacific Media Centre) have made strong condemnations of the regime’s assault on free speech and media freedom, RSF claiming that Fiji’s media had been dealt a “mortal blow”.

The military government is heading dangerously towards a Burmese-style system in which the media are permanently subject to prior censorship and other forms of obstruction. We appeal to the international community, especially the European Union and United Nations, to respond to this manifest desire to restrict the free flow of news and information by speaking out and firmly condemning media censorship.

Many media colleagues and former workmates at the University of the South Pacific are reporting to Café Pacific on their deep anxiety about developments. Comments one:

I guess back in 1987 or even 2000 some people were saying that the coup was all right because it was for indigenous rights. Even before the 2006 coup the president of the Fiji Labour Party said that the next coup would be different because this time it would be for the Labour Party. Well now we have that coup revealed finally for what it always was, and regardless of Frank's democratic motivations it is still a coup, people have been killed, jobs lost and rights removed. For me it's hard to imagine what sort of Fiji Frank will allow. Even if he is true to his word and he changes the constitution to remove racial voting (a good thing) he and his military will have established their pre-eminence politically and will always sit in the wings deciding which government should come in and which should go.
But we have been here before.

A handy news blog (published by journalists) for updates is coup four point five and an independent roundup of blogger views is at Global Voices. For a more balanced assessment of developments than most of the media, check Croz Walsh's Fiji and Gordon Campbell and Shailendra Singh's backgrounders on the complexities are also useful. Graham Davis, writing in the Australian, about "dealing with the dictator" is also far more perceptive than the simplistic narratives being served up in the New Zealand media.