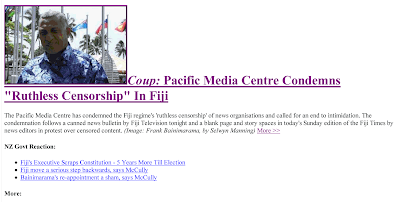 So – only good news can be reported. Wow –perhaps the army can try and shut down Al Jazeera, BBC and CNN too? I notice their reporting doesn't praise the army for their actions.

Fiji journalists must be finding it hard to discover what good news there is to report on the army?

Commodore, your actions this week have surely given a new lease of life to Fiji blog sites. For us in NZ – and Oz and elsewhere – where else should we now look for news on Fiji, but through the blogs? I read tonight on a blog site that the army is taking petrol from gas stations without payment – true or untrue? How am I to assess the truth of this comment – not from the Fiji newspapers, surely? They won’t be allowed to print that type of bad news, even if it is true?

So… a wait until possibly 2014 before the citizens of Fiji can vote for the government they want? Most governments voted by the people, would not get that lease of life with long term promises to improve the lives of their citizens. From 2006 until 2014 is eight years… a long time for a visionary leader to prepare policies of political change. Too bloody long.

It’s surely time for citizens (and those who wear army uniform too) to tell you, Commodore, about the real world of politics.

Last year, the now defunct National Council for Building a Better Fiji (NCBBF) initiated by you, put together a draft of a People’s Charter. More than 200 citizens from all over Fiji helped to draft the “pillars” that defined the content of the charter.

John Samy, of the NCBBF Secretariat, worked through these ideas and put together a draft charter. The secretariat then set about spreading the ideas among the public for them to comment upon.

The work involved printing and distributing between nearly 200,000 of copies of the draft People’s Charter in the three main languages; setting up TV interviews and approving a radio campaign of over 100 mini-programmes and adverts on the draft charter content. I know about the radio side as I put the radio programs together. Some of them were repeated more than five times a day for several months on English, Hindi and Fijian language radio stations.

It may be useful for you, Commodore, to look again at the draft of the People's Charter - especially Pillar Eight. My draft copy says that the “way forward” includes reducing the incidence of poverty by 50 percent by 2015. Nearly 200,000 of your people live in squatter camps.

If the scenario of a democratic election does not take place in 2014, a new government will take one look at this worthy Pillar and say… it was your responsibility Commodore – you were in total control of Fiji since 2006! There will also be serious questions to ask the President, but will he be around to answer and give his point of view? He is an old and frail man.

Commodore – you chose to be a politician. You will be judged by the people of Fiji on your achievements, i.e. providing jobs, housing, health care and education, and not by rhetoric and your ability to dance around kicking the constitution and journalists.

I’m from New Zealand, we have a democracy – it is flawed – all democracies are. But our politicians are judged and returned or replaced by us – even if it is only once every three years. Helen Clark was voted out and left quietly, if John Key loses the next election, he too will bow out with grace. Democracy is far from a perfect system. But even giving you credit for doing what you did with the best of intentions, you may well end up in your old age looking back and seeing that the forthcoming 2014 elections did not solve the serious problems of Fiji.

And, in case I forget, the Fiji media will report that news in great detail!!!!

You kicked out the Constitution, why not just pass a decree changing the voting system and putting the draft of the People’s Charter into law. All it needs now is a stroke of the pen – or ink on the muzzle of your gun. You could do the task in five minutes.

Patrick Craddock is former lecturer in broadcast journalism at the University of the South Pacific and former social media educator for the National Council for Building a Better Fiji.