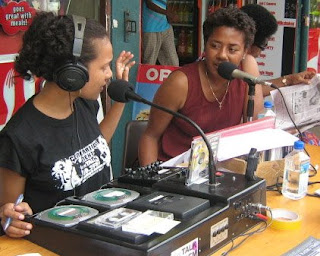 LITTLE has been reported about the experience of post-coup Fiji women in either the mainstream media or the pro and anti blogs. FemLINK pacific continues to be one of the brighter lights leading the way – especially with communication and advocacy – thanks to coordinator Sharon Bhagwan Rolls and her tireless team of “suitcase” community broadcasters. AWID’s Kathambi Kinoti recently profiled a gender perspective on Fiji through an interview with Bhagwan Rolls. This gave some fresh insights six weeks into the censorship era after the Easter putsch. The eerie atmosphere harks back to Rabuka’s original coup in May 1987. Café Pacific offers some excerpts:

There is an uncanny calmness because people have to continue to work and children have to continue to go to school, so I guess there is also a sense of "life must go on." However, there is also uncertainty, especially with the control of information through the mainstream media, and this is most apparent in rural communities who were already living within the reality of an information and communication gap.

Talking to rural women also, especially those who have suffered due to the devastating floods in January this year, there is still a sense of reliance on the government to provide, but at another level we are not sure just how much available financial resources the administration has to support the social welfare and rural development needs of these communities. It will be very interesting to see what the outcomes of the national budget for 2010 will look like.
Mainstream information and communication is seriously controlled. Our organisation runs a community radio and is also subject to censorship by the military. We have to send our broadcast log and community news collation to the Ministry of Information prior to each broadcast. We are also intently monitored when we are on air, and on our monthly “Enews bulletin” and “Community Radio Times". This very much reminds me of the media control following the first military coup on 14 May 1987.

However, we are hoping that we can continue with our work, despite there being restrictions on public meetings. We have been able to produce a new “Women, Peace and Human Security” radio series from our visits, as I have been able to conduct rural consultations during the last three weeks and hope that we will also be able to stage the rural broadcasts with our community radio station.

Community or alternative media is a critical space right now. Even if we are only communicating within an 8-10 km radius, it is an important space that we will work hard to retain. Ultimately though, with information and communication channels being tightly controlled, rural women will continue to be further marginalised and isolated.

femLINK Pacific has been advocating the implementation of United Nations Security Council Resolution (UNSCR) 1325 which mandates the meaningful participation of women in peace-building processes and this has now been stalled because processes of engagement such as the Political Dialogue Forum do not seem to be an immediate priority of the new order. However, I feel that as the women's movement we need to find ways in which we can continue our work safely.

AWID: What are women's experiences [like] living under military rule?

I will address this from the micro or grassroots level first. Going back to the military coup of December 2006, when I travelled out to meet women in rural communities, there was a sense of isolation from what was happening in the capital city as well as a reality that they just needed to get their children back to school and provide for their families. You need to appreciate that these are women from informal settlements, women who sell at the local markets, who live in squatter settlements or traditional settings, so for them the information and news was very confusing. If we are to make a difference as a women's movement, this is where we need to strengthen our work and efforts.

Right now the feeling is the same, especially since many of the women whom we work with experienced the brunt of the devastating floods in January 2009 and are still trying to put their lives back together, so their immediate priority is their families. On our recent visits the key insecurities identified were economic, health, environmental, as well as human security issues relating to infrastructure like improved roads and water supply.

There is also a sense of fear and uncertainty as with any political crisis. I feel that the military has demonstrated its might very early on and the ongoing detention of anyone who is considered to be a risk in light of the Public Emergency Decree is a way to silence any possible opportunity to publicly denounce the actions - and if you did, with the media control in place, it would be very unlikely that your message would be heard. So we do need to consider alternatives. What is critical right now is to ensure women's realities are not lost in the political maze and that the status, particularly of rural women, can provide critical development benchmarks to demonstrate that we need democratic governance so that women can have a place in decision making for their peace and human security.

There is also a need to link the growing violence, especially sexual and domestic violence to the political realities and how these impact very clearly on the status of women.

How have women's organisations responded to these challenges?

Dating back to 1987, following each military or civilian coup, women have responded actively calling for respect for the rule of law and human rights, and these have been acts of peace and non violence. Women have been detained in 1987 and again in 2006 for their work. Women human rights activists in particular were detained and suffered at the hands of the military following the takeover in 2006.

Women have rallied together, through silent peace vigils which demonstrate our commitment to peace and make the point that we will not be silenced by the acts of the overthrow of any democratic government. We have negotiated at the policy level, as well as by using our women's networks to communicate with other key political players.

Women have documented events, they have spoken out on human rights abuses and they have also been involved in ongoing lobbying and advocacy especially for a formal and mediated dialogue process which would have the support of the UN and the Commonwealth Secretariat. But this is not easy especially as these are new concepts which need to be discussed and understood by the broader movement, by more women.

A challenge has been the diverse viewpoints and perspectives within civil society on the styles of engagement with those who now have political power, and also on the process of the development of a People's Charter which now is the mandate of the current political administration, and so we have to better understand each other in order to be able to move forward collectively.

What do you see as a viable way to get Fiji back to democratic governance, and what will women's roles?

There is a critical need to continue to strengthen women's capacity as leaders and negotiators during this current period. It is critical for women to understand how to negotiate and proceed through some very new waters, as well as how not to lose sight of the need to attain parliamentary democracy while we address some critical development issues, such as the feminisation of poverty, which is a stark reality right now.

Also, how do we analytically respond to developments at the macro-economic level? Especially when women continue to face the brunt of their poverty situation - poverty of opportunity, information as well as the reality of struggling to pay school fees, rent and other expenses. This is the situation faced by rural women, older women and women with disabilities and other marginalised groups.

So any process must ensure that women are empowered to speak and be heard, especially since we can, as women, also perpetuate the traditional barriers of decision making.
We need to be assisted in this dialogue process. We cannot simply focus on the process of elections. We also need to be able to analytically address poverty which is extremely disempowering to women and affects their engagement in any political process. We need to be able to address issues of security sector governance and we also need to prepare women who are willing to participate in future elections.