Meet Herb Bell, a Samoa radio star in the making 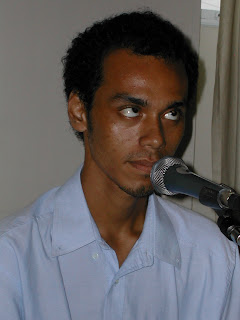 ONE of the highlights for Café Pacific’s David Robie at last week’s media freedom seminar in Samoa was meeting up with an 18-year-old blind journalism student – and being interviewed by him live on Fetu FM radio. Herb usually teams up with Ikoke Tauga on his own new current affairs programme. But due to a squeeze on David's other commitments, Herb piggybacked his interview on a special edition of Cherelle Jackson’s popular News in Focus show. The topic? Media issues raised by one of David’s earlier books, The Pacific Journalist (2001), which he produced with a team from the University of the South Pacific and around the region. It is used as a standard text at the USP and National University of Samoa j-schools (and at many other institutions). Café Pacific just heard the other day from USP that it has now sold the last copy.

Herb asked David did he have plans for another edition. The short answer was no, certainly not in that form. A regional resource like that is useful, but it's best for j-schools in the Pacific to develop their own culturally specific books and resources. David is working on another book, but this is very wide-ranging and will undoubtedly be controversial in media circles.

All his life, Herb has wanted to be a journalist. Right from a young ag 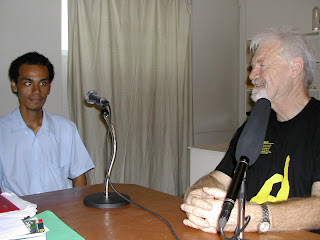 e he was inspired by the “Talofa lava, here is the news” voices and vowed to do the same one day. Secondary schooling at St Joseph’s College served to boost his journalism ambitions. “TV stuff like script writing, documentaries and voice overs, like at the South Pacific Games, gave me some opportunities,” he says. He has a natural voice and an acute sense of politics, social justice and issues – arguably more so than others of his own age. He has topped a current affairs class and has generally hovering around the top of his other classes.

Initially, he had a hiccup on getting into the j-programme at NUS because of the lack of resources for students with disabilities. Fortunately, an appeal was lodged and he got a second chance and as well as being a model student himself, he has taken a lead at NUS in developing Braille software and other facilities for fellow students.

Herb shared time at the seminar with other NUS students, such as Beauman Fuimaono Reti, Martha Taumata, Unumoe Esera and Lanuola Tupufia. For all of them, rubbing shoulders with some of the region’s media freedom “champions”and hearing insights from them was an inspiring experience.

Herb and Ikoke’s young programme is heard live on Thursday evenings on Fetu FM 93.7 and 104.1 from 7.30pm to 8pm. It is a lively blend of “music and attitude” - hip hop, r & b and rock, requests and some “good listening” commentaries. And already in its short life, the show has stirred some controversy. An item about “young people drinking during sc 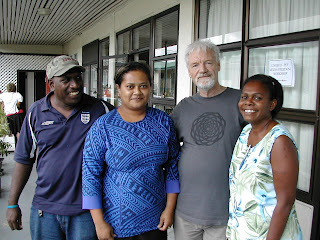 hool time” earned the wrath of some Apia parents. Why did Herb have to name and shame the school involved, they asked? Course tutor Vicky Lepou, one of David’s journalism graduates from USP, deserves a mention here in support of Herb’s emerging career. So too, Cherelle, for her encouragement for young journos in the making like Herb.

Future plans? Herb hopes to get a job with the radio station when he graduates and eventually go to the United States and learn from radio greats. All power to you, Herb and Ikoke, you’re an inspiration to the new media generation.