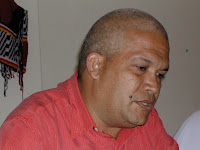 OUTSPOKEN Cook Islands publisher and broadcaster George Pitt ruffled a few Pacific feathers with the most unpopular comment of the week at the highly successful UNESCO-funded Article 19 media freedom seminar in Samoa. Speaking after an off-the-record session about the future of PINA, he stunned Pacific Freedom Forum stalwarts in Apia by branding Fiji journalists as a “bunch of wimps” for their allegedly compliant acceptance of the military regime’s draconian censorship since Easter weekend.

Fiji Times editor-in-chief Netani Rika replied on behalf of the four-member Fiji contingent: “I have been threatened, bullied and intimidated. My car has been smashed, my home firebombed. Despite this, my staff and I are still there. We remain committed to the ideals of a free media. I resent the allegation that we are wimps.” A day earlier, Rika had given an impassioned and inspiring plea for the defence of a free media in Fiji.

He spoke of the difficulty of making such a public address at the seminar when “you know that everything you say has the potential to be a threat to the very existence of 180 people with whom you work and close to 1000 who depend on them for a living”. He soundly criticised the inconsistencies of the censors and police henchmen:

In Fiji it is often the case that rules can change from day to day without warning or explanation. As days and weeks have passed, the number of censors has increased, as has the number of police officers. These enforcers of the law are no longer in plain clothes and sometimes take on the duty of the censors, deciding what we are permitted to print.

What, you may ask, are we permitted to print? Basically any story on government must put the interim regime in a positive light or it will not be permitted. No views contrary to those of the interim government are permitted – even if balance is provided in the form of a comment from a minister of state or a senior public servant.

After the ill-fated “blank stories” edition of the Sunday Times – when the paper was threatened with closure if it repeated this protest, the Fiji Times group was forced to strategise on how to deal with the censorship.

What, then, do we do next? We have decided to go about our daily assignments in the normal manner. Our journalists and photographers cover every possible assignment attempting to get as many sides of the story as possible. Yes, we continue to cover stories which do not portray the interim government in a good light. Those stories are assigned to pages and go to the censors each day. More often than not these stories are declared unfit for consumption by the people and are knocked back by the censors.

The next day we cover every assignment again – including the stories which the interim government does not want – and inundate the censors with copy. Sometimes the stories get through, at other times they are spiked. It is an extremely frustrating exercise.

Last week a domestic airline was forced to close because of financial difficulties which are not linked to the current regime. Our business writer prepared comprehensive coverage, covering all angles of the story, providing fact files, historical background – a masterpiece from a young journalist. The censor on duty did not allow our reports to run unless we carried a quote from a specific minister. We refused and pulled the story.

The following day we placed the same stories in front of a different censor – No worries, the issue was covered, albeit a day late. It is safe to say that the greatest challenge we face with censorship is inconsistency. What we may or may not cover is at the discretion or more often the whim of the censor on duty.

On May 10, the Public Emergency Regulation was extended for a further 30 days.

A plethora of blog sites has sprung up spewing Fiji stories, rumour, gossip and speculation into cyber-space. Most of this news is accessible only to the small portion of the community which has access to the internet. Unable to halt the onward march of the bloggers, Fiji’s rulers have resorted to ordering the closure of internet cafes from 6pm each evening in an attempt to stem the tide.

But how does it stop the coconut wireless which for generations has provided steady – if not entirely factual – news in countries around the region?

But we gather this week to discuss courage under fire. To say that Fiji’s media has been under fire since December 2006 is no exaggeration.

Rika's courage under fire
The 'sulu censors'
Too much pressure
Posted by café pacific at 3:11 AM