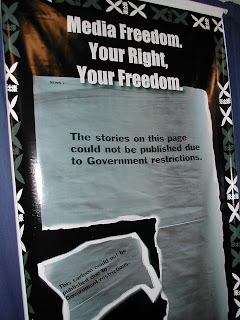 Government stands internationally condemned for its "infamous" emergency regulations -- and restrictions on "media freedom" that were the main purpose of the regulations. Pacific Freedom Forum (PFF) would even like to see the Pacific Islands News Association (PINA) remove its offices from Suva because of current press censorship.

There is no question that, in normal circumstances, the media should be free, and no question either that in all circumstances the media should publish fair, honest, informed and balanced reports. Anything less is media negligence, media licence or sheer propaganda, not media freedom. It is not enough for people within the media to protest. Freedom has to be earned. Others, outside the media, will decide where the pendulum rests between "freedom" and "licence."

My crude "contents analysis" of the Fiji media since my blog started is that it often fell short of its stated goals. Its idea of balance, as stated in earlier posts, was usually to publish one statement from the government and one each from up to five government opponents, making the tally not 1:1 but 1:5. Its selection of news was also biased, focusing far more frequently on what someone said government got wrong than on what the government was trying to do.

While not in agreement, I have some sympathy, therefore, for Permanent Secretary of Information Lt. Col. Neumi Leweni when he said: “If I was given the choice, I’d leave [the censorship controls] there for the next five years, ” thereby making it clear that Fiji media should not expect to go back to reporting the "irresponsible" way they did prior to April 10 when the Public Emergency Regulations were enacted. He said the controls would be lifted if media organizations agreed to willingly follow the direction that was being set by his ministry.

While this may seem Orwellian and outright draconian, Leweni does have a point. Much reporting, he said:

constantly focused on the negative ... [and] carried one-sided and sensationalised stories in its coverage of politics, crime and most other events.

The government’s position is you feed the public with bad things and it registers. In some instances it could lead to people doing whatever is being published. You’d be surprised if you asked the police for statistics on people breaking the law. They’ll tell you it’s dropped tremendously in the past month. It’s to do partly with the media. You feed the public good things and shape public perception with positive things, they will react accordingly. When you dish out negative issues and a lot of other things like crime, etc, it gets to people and in the end they produce those sorts of activities themselves.

From my discussions with people on the streets, they actually appreciate the news more now with a lot of positive issues being addressed ... and it’s also come from government departments that they’re now getting calls from reporters on positive stories whereas before, a lot of them were reluctant to answer questions because it was based mostly on negative issues.

It [is said] bad news sells [but] the media is still selling their newspapers....and there are a lot more positive issues being addressed in the media now.

Professor Crosbie Walsh is a former director of the Institute of Development Studies at Massey University, New Zealand. He lived in Fiji for five years and built up the Development Studies programme at the University of the South Pacific. His research interest is as a population and development geographer and in globalisation.

There is no justifiable reason for the kind of censorship controls the illegal regime is inflicting on Fiji's media. People have the right to know what is going on, and no amount of slicing the cake or dressing up statistics changes that fact.

Crozbie Walsh has a point, in fact, right before media clampdown the Fiji Media Council had just released a review report calling for more media responsibility and cooperation with government.

Still, the regime has taken censorship to the extreme. It is not only newspapers, TV and radio -even university journals and that sort of publication would have to go through the censors.