IF YOU believed the partisan Samoan press about TVNZ’s Pacific correspondent Barbara Dreaver over the past month, you could be forgiven if you thought she was about to be dispatched on a a witch’s broom to a fiery rendezvous, or simply burnt at a stake outside Aggie Grey’s. She has become Samoan tourism and the media’s public enemy number one. Her April 6 TVNZ report on “guns, gangs and drugs” has been getting a terrible hammering lately in the Apia press and around the media traps. Such is the level of venom, that the issue even forced its way as chief topic at a talanoa session one evening at the UNESCO-funded media freedom conference last week. (A welcome relief from the focus on Fiji). The TVNZ report (and sequel) has generally been branded as a “hatchet job” by Samoa's Newsline, for example, and a Sunday Samoan “editorial” referred to the “evil side of journalism”.

A series of articles, distorted, and – in many cases – clearly defamatory and malicious, have made Barbara Dreaver the target of hostility. Such has been the level of animosity that Dreaver was even reluctant to travel to Apia to take part in this Pacific Freedom Forum debate. She had fears for her safety. How sad and demeaning for Pasifika journalism that one of the people who has worked so hard to build up the Pacific affairs media profile – mostly very positive – in the New Zealand television media scene should be treated in such a vindictive and unprofessional manner. Café Pacific’s David Robie said as much at the Apia talanoa.

The TVNZ programme does have flaws, of course – as much journalism does, once it is put under an intense public forensic microscope. But there is due process to follow here – file a complaint with the Broadcasting Standards Auth 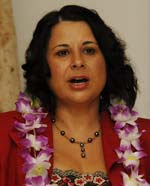 ority and get an independent adjudication based on the facts, not selective and emotive personality attacks. (At least, the Samoan government has finally embarked on this process). How quickly some of the region’s journos descended to the dog-eat-dog level has been a disappointing spectacle. Perhaps some of the Samoan editors have selectively forgotten about “fairness and balance” and they appear to have a perfunctory grasp of media law. Newsline in its May 6 edition even repeated many of the defamatory statements with a frontpage headline claiming “Barbara Dreaver threatens Newsline” (when she is merely trying to get her side of the story heard). Newsline’s Pio Sioa, in an editorial note, offers a lame duck explanation about why the newspaper didn’t run Dreaver’s side of the story in the first place (namely her sworn affidavit of April 22 publicly released by TVNZ in the absence of actually talking to her):

The [daily] Samoa Observer published the affidavit in an issue ahead of [weekly] Newsline and it left little recourse but for Newsline to make reference to it only.

So fairness and balance at Newsline has deteriorated to the level of making a judgment based on what the opposition newspaper has done? Nonsense. Also, maybe nobody told the editor that while a lawyer’s “defamatory” letter is protected by privilege, republishing the statements in the paper is not. Café Pacific notes that Barbara Dreaver has engaged one of New Zealand’s top media barristers, Simpson Grierson’s William Arkel, in her corner. Good luck, you media fellas in Apia, we hope your anti-gangsta vendetta doesn’t take you to the cleaners.

Not everybody in Samoa is deluded by the Samoan pro-tourism press smokescreen. Take this indignant blog posting as a footnote:

Barbara Dreaver [has] exposed a weakness in our culture … dissenting youths who are on fringe of society!!
The clampdown on the Barbara Dreaver [programme] is all about ensuring the reputation of Samoa to tourist is seen as gangsterless and ok under matai control. All for big dollars eh? How about the safety of the locals? None whatsoever is there any media concerns about our people's safety. When the Vaiala government paid pulenu’u (village mayor) and his gang attack innocent women children over disputed lands, the government did not give a sh%*t about the local women and children's welfare! Now everyone's jumping on the bandwagon of tourist safety as a justification for denying Dreavers article on the existence of gangs in Samoa! As a Samoan who had been abused and clamped down by Samoan gangsters led by Samoan public servant, the pulenu'u, I would say, Ms Dreaver exposed the truth about Samoa which some of us have suffered at the hands of government-endorsed gangster like the Vaiala pulenu'u who continues to harass and exert power over helpless women and the disabled ....
- Barbara Dreaver debater!

Samoans are known to over-react and the victimisation of Barbara Dreaver is a good example of this.

I commend Ms Dreaver for the fantastic story and I have no doubts that she would have fabricated the story.

It is time for Samoa to accept that they're not perfect, and like any other country, they must try to fight the latest problem, highlighted by Ms Dreaver.

I would have thought they would have praised Ms Dreaver for bringing the problem to their attention so that they can get to the bottom of it.

The prime minister of Samoa was very quick to comment on what's happening in Fiji and criticise Frank Bainimarama, yet when it came to his own backyard, he lashed out and showed a side very similar to Bainimarama.

Ms Dreaver should be applauded for a job well done.

No country is perfect and many Pacific countries have gun, drug, and crime problems, including Samoa.

However, the intro to Dreaver's story by the two presenters from the TVNZ desk was a little too dramatic I thought.

Also, the story and its visuals are edited in a particular way that magnifies the menacing gang/violence element.

But accusing Dreaver of STAGING the whole machete scene? I don't think so.

Taking out a mission to destroy one Pacific journalist is a low blow that will not solve anything. Making personal and petty attacks on Dreaver weakens the credibility of the argument.

Samoa indeed has the right to be sensitive about the regional portrayal of their country and taking legal action against TVNZ was the more responsible route to take.