From Fiji to the kanaka Maoli struggle against corporate media 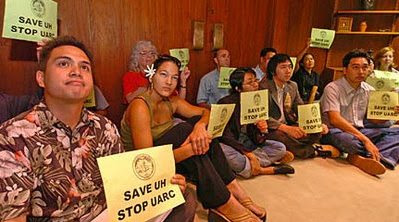 REFRESHING to see West Papua make it into this month's Apia declaration on Pacific media freedom:

However, just why West Papua is mentioned alone outside of the Pacific Islands Forum countries or territories isn't entirely clear. Café Pacific would also similarly bracket the world's youngest nation, East Timor; French-ruled Tahiti and New Caledonia; and the US state of Hawai'i. All of these countries, territories and states have critical indigenous and cultural freedom of expression and free media issues too. On the topic of Hawai'i, Pasifika Foundation Hawai'i executive director Ana Currie, one of the delegates at PFF, has shared an impassioned statement among colleagues. Now it is also being shared on Café Pacific:

When focusing on protecting the freedom of expression of the peoples of the Pacific, it is important to expand the borders of our minds and hearts to include Hawai'i Nei – Ka Pae ‘Aina – in the circle of Pacific island nations in very real need of our attention and inclusion.

There are often statements in the Pacific about Hawai'i being “too American,” but just as you would never reject Tahiti and her islands as being “too French” or West Papua for being “too Indonesian,” it might be helpful to reflect on the fact that the sovereign, independent nation of Hawai'i, which has never been legally extinguished, is suffering under a very heavy load of occupation and deprivation of rights. The fact that Hawai'i is considered a state of the USA is a painful one, and one which would hopefully never be used as a reason to exclude Hawai'i from Pacific regional organisations. For those of who who are interested, I’ve included a short summary of the statehood vote fraud after this comment.

While the dangers of media freedom in Hawai'i are much different from those of, for example, Fiji, where media suppression is done at the point of a gun, it may be very instructive to examine what has happened to news in Hawai'i, where the flow of information is increasingly under control of mainland US corporate control. You will never see kanaka Maoli issues accurately or fairly reported in mainstream television or print news in Hawai'i. As in the rest of Pasifika, we are very grateful for the growing influence of internet-based media, but the fact remains that the majority of people receive their news from the corporate outlets, which have their own various agendas – making it very difficult for the average consumer of news to develop anything even close to an informed opinion about Maoli issues.

The Pacific has already had a small taste of these kinds of effects with the controversy over the Barbara Dreaver "guns, gangs and drugs" in Samoa story. Although Dreaver has attracted a lot of personal animosity in Samoa for this story, in my mind the issue is not about Dreaver at all, but about the style in which the story was presented by ONE News; although the basic facts of the story may be true, the real issues are almost lost in the dramatisations, which are more like “info-tainment” than real news.

I’ve watched over the years as the American corporate trend of sensationalising news has crept into the New Zealand media. Dreaver’s story was just like every single news item one could watch on American television every night. In this case, the story happened to come up against the national pride of Samoa and thus became a issue in and of itself, but hundreds of stories like this are aired every week in the US and generally the subjects don’t have the critical mass (as in the case of Samoa) or the energy or funds, to lodge a protest about the way the story was told. People have just come to accept it.

This trend is something we need to find a way to resist if true Pacific media freedom is to be achieved. While situations like those in Fiji need priority support, we also need to be on guard against Pacific media becoming gradually overtaken by corporate interests from outside the region and/or being submerged under the tidal wave of dumbed-down, sensationalised pseudo-news, a trend that started in the US and is sweeping across the planet. If we allow outside corporate media to frame and control perspectives and information, the voice of the Pacific may be lost in the din.

Part of the work that Pasifika Foundation Hawai'i does is to encourage and support independent Maoli media in Hawai'i. One such initiative is The Hawaii Independent, a new print and online publication launched by a current PFH staff member, Ikaika Hussey. This publication seeks to report mainstream and Maoli news and to “set a new standard for Hawai'i-based media, with a fundamental ethic of non-partisanship, probing investigation and analysis, robust debate, and democratic dialogue.”

The Hawai'i Statehood Fraud
In 1945, leaders of nations gathered to sign a UN Charter which called for self-governance of territories under colonial-style conditions, and in 1946, the U.N. General Assembly adopted Resolution 66 in which specific U.N. members and the respective territories under their rule were named. The United States became obligated under a "sacred trust" to bring about self-governance to Alaska, Guam, American Samoa, the Virgin Islands, Panama Canal zone, Puerto Rico and Hawaii.

Over the years, the term “self-governance” was clarified to mean that the people of the territory must be offered choices of how they would relate to the UN member - integration, free association, or independence. Many countries around the world began to emerge from de-colonisation through this process. But in Hawai'i, the legal process went totally awry. Rather than permitting the three choices called for by the U. N, the United States limited the choice, placing only one question on the 1959 statehood ballot, "Shall Hawai'i immediately be admitted into the Union as a State?" A yes response resulted in Hawai'i’s integration into the US as a State. A no vote would have resulted in continued territorial status in the US (also a form of integration). The choices of free association or independence were never presented to the people. The vote was boycotted by many kanaka Maoli and the members and families of the occupying military forces were allowed to cast votes!

The United States then reported to the UN General Assembly in 1959 that Hawai'i had exercised its right to self-governance and in doing so, elected to become a State, it convinced that assembly to remove Hawai'i from the list of territories subject to self-governance. This was nothing less than outright fraud.

Picture: Kanaka Maoli activists, including Hawaii Independent publisher Ikaika Hussey, protesting at the University of Hawai'i over an intrusion by the US Navy in 2005. Photo: Uriohau