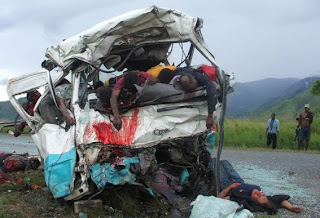 FORGET the inane NZ Transport Agency safety advertising campaign on New Zealand television – or anywhere else for that matter. A series of tragic and disturbing photos taken by a young “citizen journalist” at the scene of Papua New Guinea’s reportedly worst bus accident this week is a grim warning. Two 25-seater buses collided head on in the Highlands Highway in the Markham Valley heading towards Lae. They were travelling about 100 kph according to witnesses, and the carnage left at least 43 dead. Samson Nelaho, a resident of Kainantu, missed out on the ill-fated Highlands bus and jumped onto one leaving a few minutes later. He had a digital camera with him and captured several graphic images of the crash scene, some being published by both the Post-Courier and The National. His story and those of survivors such as Gideon Jack (pictured below) have also been featured in both papers. Samson says: "Some were trapped in the crushed buses and we tried to free them but couldn't s 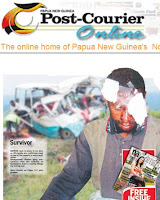 o we had to leave them."

The shocking accident stressed out the morgue staff at Angau Hospital who were already running short of of space and awaited delivery of two more freezer containers. The morgue’s freezer was already accommodating six bodies from a plane crash and eight prison escapees who had been shot.

Café Pacific thanks Malum Nalu of The National for alerting us and his help for Pacific Scoop coverage.

Was this entirely necessary? Do you think that by showing something as gruesome as this on Cafe Pacific, it's going to do one jot to reduce the road toll in PNG or anywhere else? A severe lapse of judgement in my humble opinion.