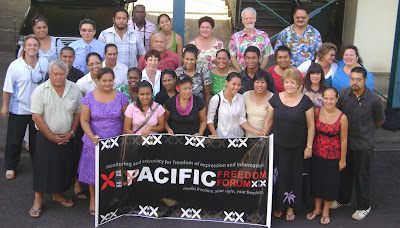 PACIFIC media freedom advocates meeting in Apia, Samoa, this week did their best to keep the Fiji censorship problem in proportion and give other regional issues a good hearing. But it was tough. The Fiji challenge kept bubbling to the surface, leading to a spirited debate on the future of PINA at one session and feisty calls for the regional news service Pacnews to get out of Suva at others. Fiji dominated all the speeches on the opening day with several of the region's media freedom heavyweights giving the regime a hard time - but they also warned that the young generation coming through into the industry should not be seduced by government freebies. Some quick thoughts:

Netani Rika (The Fiji Times): “How do we build ... courage? Simply, by not backing down.”

Russell Hunter (Samoa Observer): It's "appalling" that Pacnews and PINA are staying put in Fiji.

The Pacific Freedom Forum made some tremendous advances at this UNESCO-funded seminar. More in a later blog, but in the meantime Pacific Media Centre has a report and here is the final communique.

Picture: Participants at the Article 19 media freedom seminar in Samoa. Photo: PFF.
Posted by café pacific at 8:40 AM

Netani Rika is a snake.

It disappoints me that you would advocate on behalf of someone who got to the level that he did by fanning the flames of ignorance and hatred.

I'm not military goon. I know for a fact that Fiji Times helped burn down my country in 2000 and the people who poured the gasoline and lit the fire are now talking about media freedom.

If you believe in media freedom and the importance of journalists to carry out investigative reporting, then ask Rika why the newspaper never gives serious treatment to election discrepancies.

I'll give you a hint. It's because like the Police and Civil Service, they are sympathetic to the ethno-nationalist agenda.

These people seek to control the population by continuing to keep them ignorant.

It sickens me that Netani Rika could be photographed standing behind a banner for media freedom.

And you sir, the writer of this blog, have crossed over into the territory of cultural gatekeeper. But as a Kiwi-based academic, it doesn't surprise me in the least.